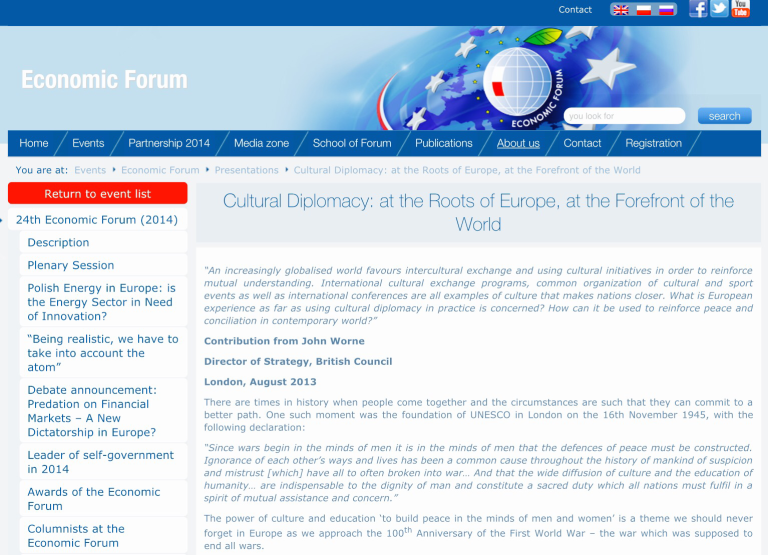 “An increasingly globalised world favours intercultural exchange and using cultural initiatives in order to reinforce mutual understanding. International cultural exchange programs, common organization of cultural and sport events as well as international conferences are all examples of culture that makes nations closer. What is European experience as far as using cultural diplomacy in practice is concerned? How can it be used to reinforce peace and conciliation in contemporary world?”

There are times in history when people come together and the circumstances are such that they can commit to a better path. One such moment was the foundation of UNESCO in London on the 16th November 1945, with the following declaration:

“Since wars begin in the minds of men it is in the minds of men that the defences of peace must be constructed. Ignorance of each other’s ways and lives has been a common cause throughout the history of mankind of suspicion and mistrust [which] have all to often broken into war… And that the wide diffusion of culture and the education of humanity… are indispensable to the dignity of man and constitute a sacred duty which all nations must fulfil in a spirit of mutual assistance and concern.”

The power of culture and education ‘to build peace in the minds of men and women’ is a theme we should never forget in Europe as we approach the 100th Anniversary of the First World War – the war which was supposed to end all wars.

A second founding moment also happened in London, on the 7th of October 1940 – at the height of the Battle of Britain in World War II. On that day the British Council received its Royal Charter, with the purpose to build a better future for the UK through cultural relations.

By: “Promoting the United Kingdom, sharing the English language and encouraging cultural, scientific, technological and educational co-operation between the UK and other countries.”

The British Council still does very much the same things for the UK, sharing the UK’s most attractive assets: the English Language, UK education, the Arts and our way of life.

But the context today is very different from our first founding. In 2013 we live in a turbulent, unpredictable and far more interconnected world. Natural and man-made shocks have shaken states and economies all around the globe in recent months and years. The world moves faster now. But in many parts of the world there is still the same thirst for education and culture – and English – as there was when the British Council was formed.

Indeed the opportunities and demand for English, education and UK culture have never been greater than they are today. But the way in which we share culture with the world has changed enormously. King George V said of the British Council in 1934, that its purpose was ‘to teach the world what it owes Great Britain’. These days we all need to be a bit more humble. When you are concerned with culture – and above when you are dealing with people – the key word is sharing. Countries need to move on from the days of projecting, propagandising and imposing culture.

I often say in international relations there six things a country can do: ‘giving’, ‘helping’, ‘sharing’, ‘boasting’, ‘shouting’ and ‘fighting’. This fits with Joseph Nye’s classic definition of ‘soft power’ coined in 1990: ‘The ability to attract and co-opt rather than coerce, use force or give money as a means of persuasion’. In an ideal world sharing culture and trade is a lot better than firing bullets or giving aid.

That is not to underestimate the significance of ‘hard power’– military intervention, diplomacy, sanctions and subsidies, as well as aid are as vital to international relations, geopolitics and people’s lives as they have always been. But the problem for many Governments – outside one party states and dictatorships – is these days more and more culture and trade happens outside or despite Governments not within or because of them.

And in the last five years the explosion of connectivity and social media means that even things which were once potentially controllable – broadcast and media – are now increasingly ‘for and from the people’ not by or through States.

‘Soft power’ is much less the property and tool of Governments these days and much more the responsibility of people and cultural institutions. Some say diplomacy, culture, education, business and innovation collectively add up to ‘soft power’, but the weight and impact of these pieces of the jigsaw is changing.

Far more of a nation’s ‘soft power’ now resides in its cultural and educational institutions – in the UK’s case in great galleries, museums, universities and theatres, and in brands and icons like Premier League football, the Royal Family, Jaguar, James Bond and Burberry – encapsulated last year in London’s 2012 Olympics and Paralympics. And here I believe the UK and Europe have a real comparative advantage, as all the countries of Europe have rich and diverse cultural histories and traditions which can fascinate and attract.

But perhaps even more important for us all – especially for smaller states – is a great deal of ‘soft power’ is now created directly and daily by the ordinary and extraordinary people of the Europe – teachers, artists, actors, sportspeople, young people, policymakers, parliamentarians, commentators and comedians to name a few. What we blog, tweet, tag, snap, like, post, comment on and curate speaks volumes for who we all are – and the countries we are from – and reaches all four corners of the world through diasporas driven by the twin currencies of ‘interest’ and ‘followership’.

As we have seen in the UK and in other parts of the world – in ‘twitter storms’, Wikileaks and flashmobs – the genie of social media is out of the bottle and won’t be put back in. People can now connect and create content, share ideas and learn about each other at the speed of light. And this is where a lot of any country’s power of attraction now lies – driven by openness, creativity, artistic expression, diversity and plurality.

Different countries have different political systems, belief systems and values systems and we have to respect for those differences. We also have different mixes of state-led, state-facilitated, people-to-people, charitable and commercial approaches to culture and education. But at their best what these all share is recognition that cultural encounter and cultural exchange – done in the right way – builds trust between people. And this is a strong foundation for greater shared prosperity.

Beyond economics, culture can as easily drive wars as promote peace. At its root, conflict is a catastrophic absence of connection – a total failure to see things from the other person’s point of view. Which underlines the importance of sharing culture and education in the right spirit and creating and curating more opportunities for encounters between peoples – through sports, science, study, tourism, Arts and more. In these activities people can explore and escape ‘single identities’ – the things that can come to define and separate them from others in other countries: winner/loser, richer/poorer, aggressor/victim.

People who have learned to mistrust each other need neutral spaces and safe topics to restart dialogue and explore their differences. This is why sharing English, the Arts and education works for the UK: in Afghanistan, Iraq, Zimbabwe, Burma, Egypt and many other countries where theUK divides opinion. English classes, libraries, museums, galleries and theatres, study visits, cultural and educational programmes, conferences and seminars – and the great conversation starters: languages, the Arts sports, science and education mean we can get people in a room with us who otherwise never could or would.

But the power and value of culture for modern Europe is perhaps best captured – as so often – by our young people. In September 1999, a contest was held to invent a motto for the European Union. Over 2,500 classrooms took part. Of the 2,000 mottoes submitted, the most popular terms used by the young Europeans were: “Europe”, “peace”, “unity”, “union”, “together”, “future”, “difference”, “hope”, “solidarity”, “egality”, “liberty”, “diversity” and “respect”.

This gave rise to the wonderful EU motto, adopted in 2000: ‘Jedność w różnorodności’ or‘United in diversity.’

As the UNESCO charter so beautifully captures, culture matters to us all – as soon as human beings have food the next thing they seek is culture. The diversity and history of our countries, cultures and institutions are among our greatest assets as well as being among the things which can divide us. But importantly, much more of ‘soft power’ in the 21st century is ‘people power’ – the power of people to vote with their feet, move directly or virtually where they want and gravitate towards people, places, opportunities, ideas and creative content which are more internationally and instantly mobile than ever. And the countries of Europe need to be attentive to this as economic power moves East and South to Asia, Africa and South America.

At the British Council we know from decades of experience – and multi-country research – that when we share the English language, education and UK culture we build relationships, win friends and create trust which makes people want to visit, study and do business with the UK – as well as being less likely to mistrust and dislike our people and Government. These people-to-people relationships built in countries all round the world; in English classes, through scholarships and on exchange programmes, with all parts of societies; from Presidents and Prime Ministers to poets and school pupils – provide a stable long-term platform for UK security, prosperity and trade.

I always summarise the UK’s ‘soft power’ by saying ‘to know us is to love us’. It isn’t much more complex than that. When we share our country as it is, when we go out into the world as we are, when we are honest about what we get wrong as well, as what we get right, there is no more attractive way to share the UK. And there are no countries more attractive to each other and the wider world than the countries of Europe; when we are united in our diversity.